Idaho Falls, Idaho is located in Bonneville County. Idaho Falls is the largest city in the Eastern Idaho region and is the the third-largest metropolitan area in the state behind the Boise City-Nampa and Coeur d'Alene metropolitan areas. In the past decade, it has been surpassed in population by Meridian and Nampa, making Idaho Falls the fifth -largest city in Idaho. The city is served by the Idaho Falls Regional Airport and is home to the Idaho Falls Chukars minor league baseball team. Idaho Falls borders on Ammon, Idaho and serves as a hub to several surrounding communities including Ucon and Iona, Idaho. 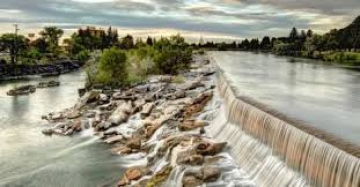